Home/Amazing People, City Life, USA/The Man Who Saw The Last Speech Of Martin Luther King – “It Was Something Else”
Previous Next

Sharing stories by the river: With Ron, Irvin and Harry on the Mississippi riverside. The Man Who Saw The Last Speech Of Martin Luther King.

Tales on the Mississippi | Sharon Henry

It’s not every day you meet someone who witnessed ground breaking history; the last speech of Martin Luther King in 1968. Here’s how the story unfolded.

“Life in Memphis is good, man,” Ron tells us, “especially if you like barbeque, catfish and good blues. I’ve been in the military, been to different states, been over to Japan, but ain’t nothing like home. Memphis, it’s in my blood, it’s in my DNA.”

Elvis Presley Would Drive In

A feel good vibe struck me the moment we arrived in the city, it’s got a special ‘je ne sais quoi.’ We are sat here on a promenade in the late morning sun, overlooking the Mississippi river, and a local trio are giving endorsements of how great their town is.

Street scenes from our day Walking in Memphis. The Man Who Saw The Last Speech Of Martin Luther King.

The camera is such a conversation starter, not literally of course, but its sexy, professional looks always draw attention. That’s how we met Ron, Irvin and Harry whilst out on their Sunday morning stroll in Memphis, Tennessee, two in wheelchairs the other on a bike. We started chatting after they made a passing comment about the camera.

“We’re not just about blues,” Harry points out. “We the home of soul, we have Stax Records, we got RnB, jazz, and the King of Rock ‘n’ Roll, Elvis Presley.” In fact a main attraction here in Memphis is Elvis’ mansion, Graceland.

Classic Blues as well as Rock ‘n’ Roll albums on vinyl are still sold on Beale Street in Memphis, including records from the Stax music label. The Man Who Saw The Last Speech Of Martin Luther King.

Memphis: Home of the Blues, Birthplace of Rock ‘n’ Roll
A collection of images showing artists who have performed on the famous Beale Street in Memphis. This can be found in the Visitor Centre on the riverfront in Memphis.

“I’ve seen Elvis Presley several times,” reminisces Harry, “he from Memphis, sooner or later you’d eventually pass by him. You could be working at a service station and he’d pull up.

“Martin Luther King got killed here in Memphis. Right about three, four blocks from here, it used to be a motel called ‘Lorraine Motel.’ It’s a museum now.

Reverend Martin Luther King Jr stands with fellow civil rights leaders (from left) Hosea Williams, Jesse Jackson and Ralph Abernathy on the balcony of the Lorraine Motel in Memphis, Tennessee, on April 3 1968, one day before King’s assassination.
(photograph displayed in Center for Civil and Human Rights, Atlanta, Georgia). The Man Who Saw The Last Speech Of Martin Luther King.

“I went to his last speech here in Memphis back in ’68,” Harry says quite unassumingly. Goosebumps race down my arms. “I was ’bout 17 years old then,” he continues.

“He came for a garbage strike. He had that speech here in Memphis, next day he got killed.”

That earth-shattering moment happened on 4 April, 1968, a day after Dr Martin Luther King Jr gave his prophetic ‘I’ve been to the mountain top’ speech. 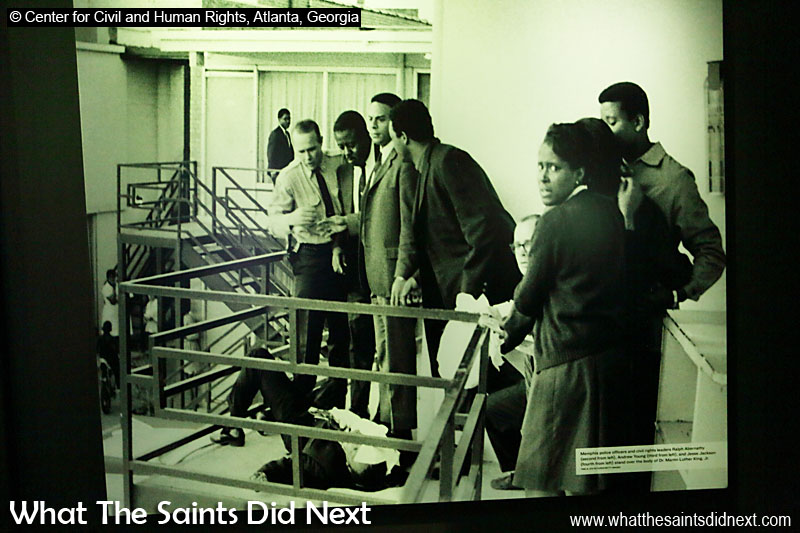 Memphis police officers and civil rights leaders Ralph Abernathy (second from left), Andrew Young (third from left), and Jesse Jackson (fourth from left) stand over the body of Dr Martin Luther King Jr after he was shot at the Lorraine Motel in Memphis, Tennessee, on April 4, 1968.
(photograph displayed in Center for Civil and Human Rights, Atlanta, Georgia)

Display board from the Center for Civil and Human Rights in Atlanta, Georgia. The Man Who Saw The Last Speech Of Martin Luther King.

Of course, we want to know what it was like to have witnessed the great man at work. “Hey, it was something else,” Harry nods.

“Next morning riots broke out like crazy,” remembers Harry. “It lasted for about two or three days.”

The assassination of Dr Martin Luther King Jr rocked the world. We ask Harry how he had felt at the time. “I did the same thing everybody else did. I picked up bricks, bottles and everything.” At this point his buddies give him a nudge to check this confession doesn’t land him in trouble. “It’s too late, they can’t put me in jail now!” he chuckles. “But the morning after he got killed, oh man, the people they went nuts.”

“I was a child then but for me the experience was like yesterday,” says Ron. “You can’t forget nothing like that.”

“Yeah you were in your first pamper!” teases Harry, shaking his head.

We sit here some more on the Mississippi sharing stories. The trio recommend we visit Stax’s museum, BB King museum, eat at the Southern Hen restaurant and listen to live music in the park on Beale Street. Then they continue their wander along the river.  And we feel privileged to have met a man who saw Martin Luther King’s last speech.

From left: Blues band playing in the park on Beale Street; we didn’t see Elvis drive in but his driver’s licence was one of the many souvenirs on sale; the attention grabber (the camera)

We are husband and wife photographers, Darrin and Sharon Henry, sharing our passion for photography and story-telling. This blog contains tutorials, travel adventures and model shoots, plus our favourite topic, real-people photo-stories. Great to have you visiting us today. Click our picture for more information about us.

Get our Breeze e-magazine for free when you follow the blog.

This site contains affiliate links to products. We may receive a commission for purchases made through these links.